USRA RACE OF CHAMPIONS: SPORTSMAN CLASS PART 2: THE I RAN OUT OF FUNDS PROBLEM + WHAT I'VE BEEN UP TO

yup, I did it, I ran out of funds. (start the finger pointing)

actually, I didn't run out of funds building the airplane, or even designing the airplane for that matter - I ran out of funds because some other important things needed to be taken care of. Unfortunately that means the end of the SR-1 racer for this year, however,  it might see a comeback next year in the growing sportsman class.

The event is scheduled to begin on the 24th of this month (October) and conclude on the 27th. I'll be on site from Friday the 25th until Sunday the 27th, and I'll make sure to take plenty of pictures and do a brief write-up when I return home - hopefully I can grab a few videos and throw them up on Youtube or something.

In other news,
I've already begun preparing for the 2014 AMA Expo. I'll be there flying in the demo area for entertainment and demonstration purposes, come drop by if you'd like! Also, feel free to ask anyone in the demo area about their aircraft or anything else we might have on hand, it's our jobs to promote and explain our great hobby to anyone and everyone in the hopes that we can help people, or even bring new people into the sport.

Quite possibly a week or so before the event I'll compile a list of projects/planes/devices I'll be bringing as a primer for the event.

I've been working on perfecting Skyfighters for about 3 years now and I'm really happy with how far they've come. For once I'm nearly satisfied with how something flies and I see no reason to change my 2013 AMA Expo build for this upcoming year, if you'd like to know more about my equipment choice and a few details regarding the model, you can check out the link to an earlier blog post > Here <

In the meantime, I've done something a bit silly with a heavily used skyfighter: 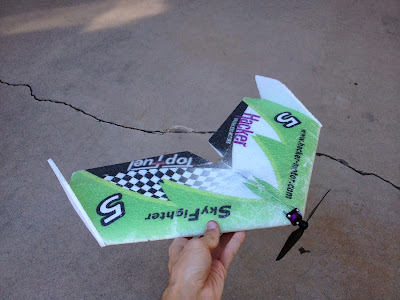 This is what a Skyfighter looks like if you cut about 3" out of the center section, add about 5 degrees of sweep,  and splice in a couple new leading edge and nose pieces (the same could be achieved by just cutting part of the wing root out).

The DX18 is currently available as a bonus buy package from Horizon Hobby Currently at this link:
->DX18 Bonus Buy<- 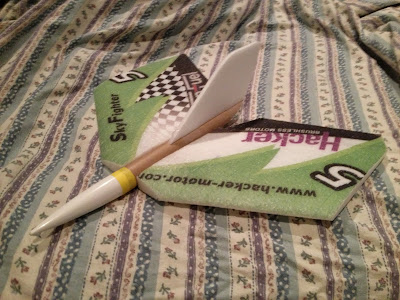 I'm not even sure this one needs an explanation. 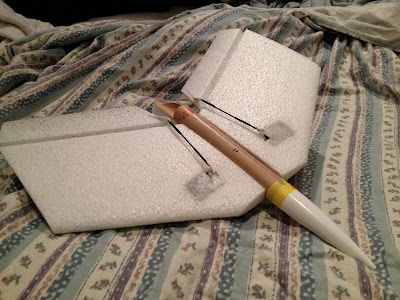 Notice the two pieces cut off the front of the wing. Remember how I said I "borrowed" some nose pieces for the planes above? well there you go, these are the panels I borrowed them from.

The airplane itself is fairly small. The wingspan is about 18", with the center section consisting of an Estes 24mm ID wrapped cardboard tube made for model rocketry....and I'm using it for such a purpose - the rear of the tube holds a D-sized rocket engine (also Estes)

Overall it's a very fun plane to fly. We've only glide tested it so far (dropped from another plane). Soon enough we'll throw in a live engine and light it off...(I figure we should wait and fly it at a legitimate club where rockets are approved in order to keep everyone happy)

Last but not least (for this blog post anyway) is the Thunderbird. 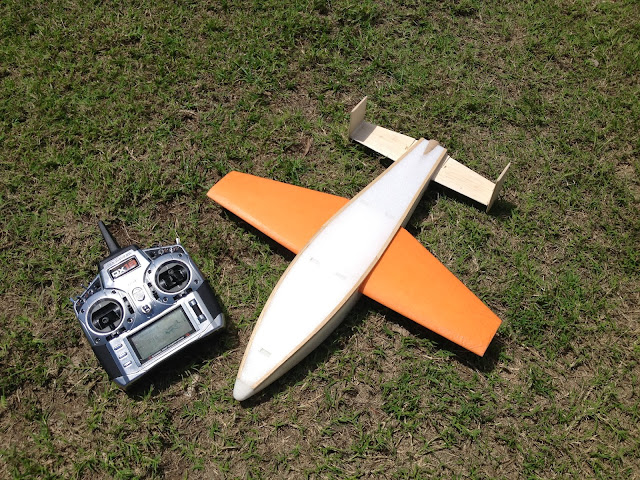 Pictured here after a successful flight.

I built this thing originally about 2 years ago and only flew it once because it requires two people to actually get it into the air and I was having trouble finding people interested in piloting a rocket vehicle.
speaking of which - It's air dropped from a Multiplex FunCub pictured here with the Thunderbird sitting on top in the launch rig: 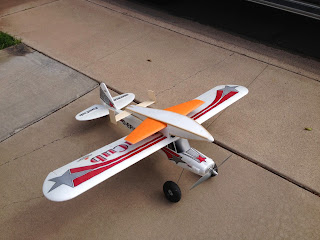 and a behind shot for good measure: 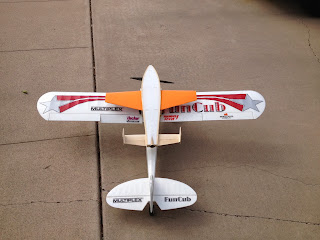 The plane flies really well and is incredibly stable. It has a fairly low CG, and a high wing mounting position with a slight amount of anhedral for maneuverability purposes and to cup the air a little bit at high angles of attack. The Thunderbird relies on tailerons to maintain control. Tailerons describes a configuration where you use what would normally be the 'elevator' surfaces for roll control as well as pitch control. In the radio (DX18), I have the airplane set up as a delta, enabling delta mixing. It's extremely tame and it self rights, infact we have not been able to get it to roll past 90 degrees yet, it reaches about 70 degrees and just stops rolling. It's certainly interesting and I believe it's due to the low point of control, and high positive roll stability which overcomes the force from the tailerons. Furthermore, I think adverse yaw has a play in it as well, but probably not as much as the other two factors.

A few construction details:
The wing is carved, then finish sanded from three layers of 6mm Depron bonded together with spray adhesive. The airfoil is a


NACA 2412. Finally it is covered in Orange flavored Japanese tissue paper using 3m Super 77n as the adhesive, then shrunk slightly with  a water mist.
The tail is built from two layers. One layer is 1/8" thick Balsa wood with a fair amount of cross grain, it is the top layer and of course, visible from the top. The bottom layer is 1/16" thick Balsa, it consists of a heavier density wood with large amounts of cross grain with excellent structural properties, it's glued on with Elmers wood glue at a 45 degree angle to the top layer to promote torsional rigidity which is needed due to the rectangular vertical fin shape....and flutter prevention in general. The vertical stabilizers are made in a similar fashion with two layers of wood with the grain structure 45 degrees off of parallel. I then added carved Balsa wood fillets to increase the bond area and provide better load carrying torsionally from the vertical stabilizers to the Horizontal stabilizers.

the fuselage is constructed primarily of 6mm Depron with 1/4" Balsa wood glued to the corners of the box structure to add longitudinal rigidity as well as ding resistance (foam dings easily, especially sharp corners....) There are several Depron structures inside to hold the wing/engine tube and the forward electronics bay, which is accessible from a door on the underside of the model.

This concludes tonight's updates, check back soon as I continue to write about my current projects and some cool stuff we have going on soon. 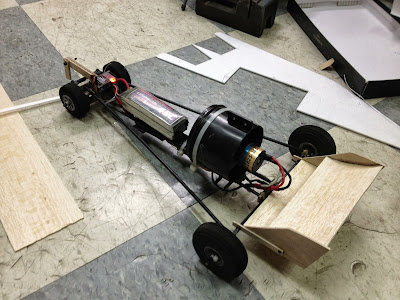