Foaming Around: Foamboard and the AirWay

Recently I was perusing a Dollar Tree with my cousins looking for cheap toys to motorize when we came across the miracle that is Dollar Tree foamboard. Literally, it's a dollar per sheet - how could you possibly go wrong? Of course I bought a few sheets just to see what I could do with the stuff. 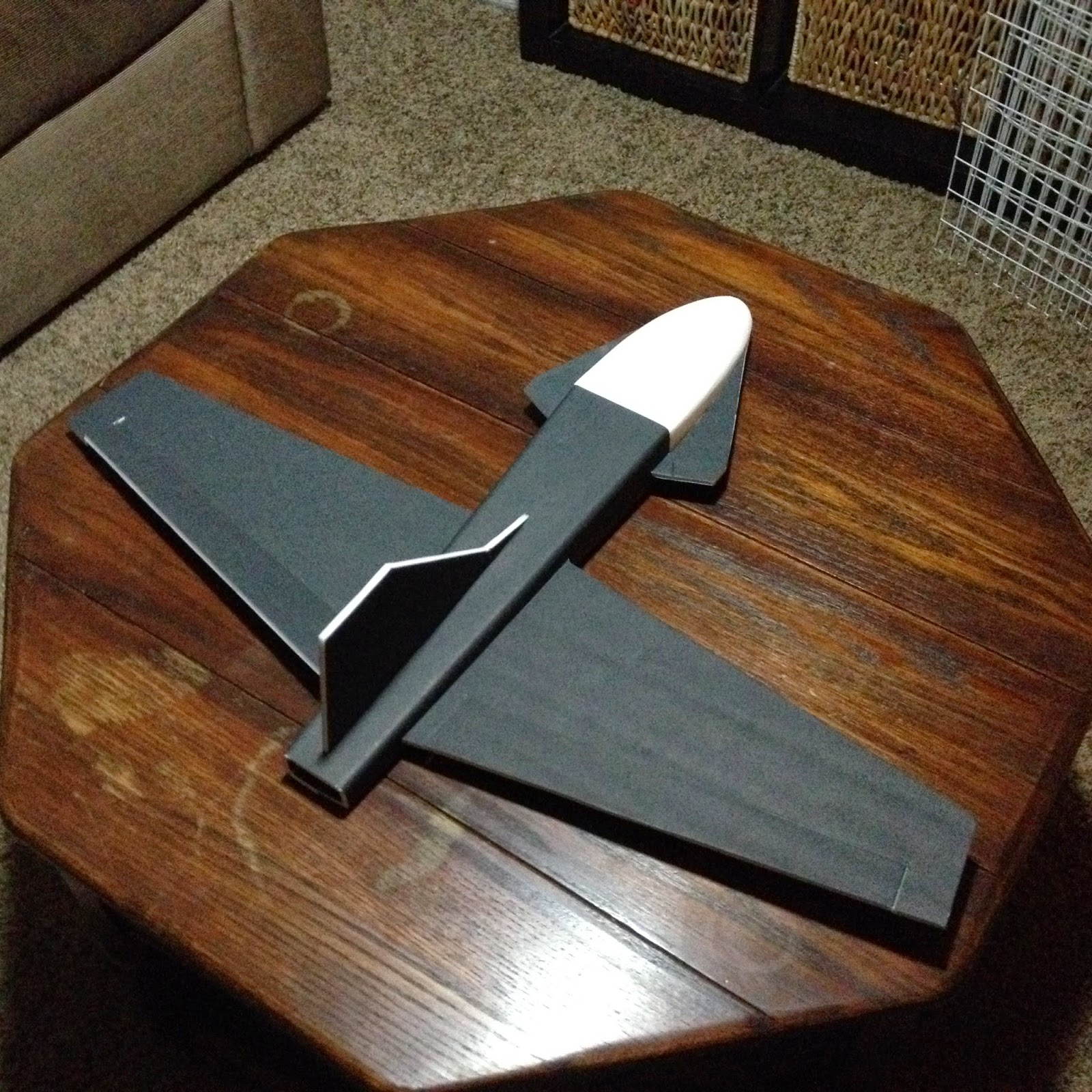 Turns out it's pretty freaking awesome. There's a lot of hidden usability within foamboard; the surface is much more durable than straight up foam, hot glue and other cheap glues stick really well to it, certain brands are extremely cheap, and lastly you can use the paper as hinges for surfaces, doors, or even to fold the material around corners. This stuff is awesome!

I decided that I couldn't possible be the only one who knew about this, so I spent a few minutes Googling foamboard, and the use of it for flying things. As it will be, most everyone knew about foamboard and I was just super late to the party... as usual! However, I'm planning on making quite the entrance to the foamboard flying things community.

Over the past 2 months I've explored different building methods, adhesives, and design work to optimize my foamboarding techniques and general knowledge of the material, and now I think I'm to the point where I can start building cool things - but probably mostly just useless junk that only I think is cool. 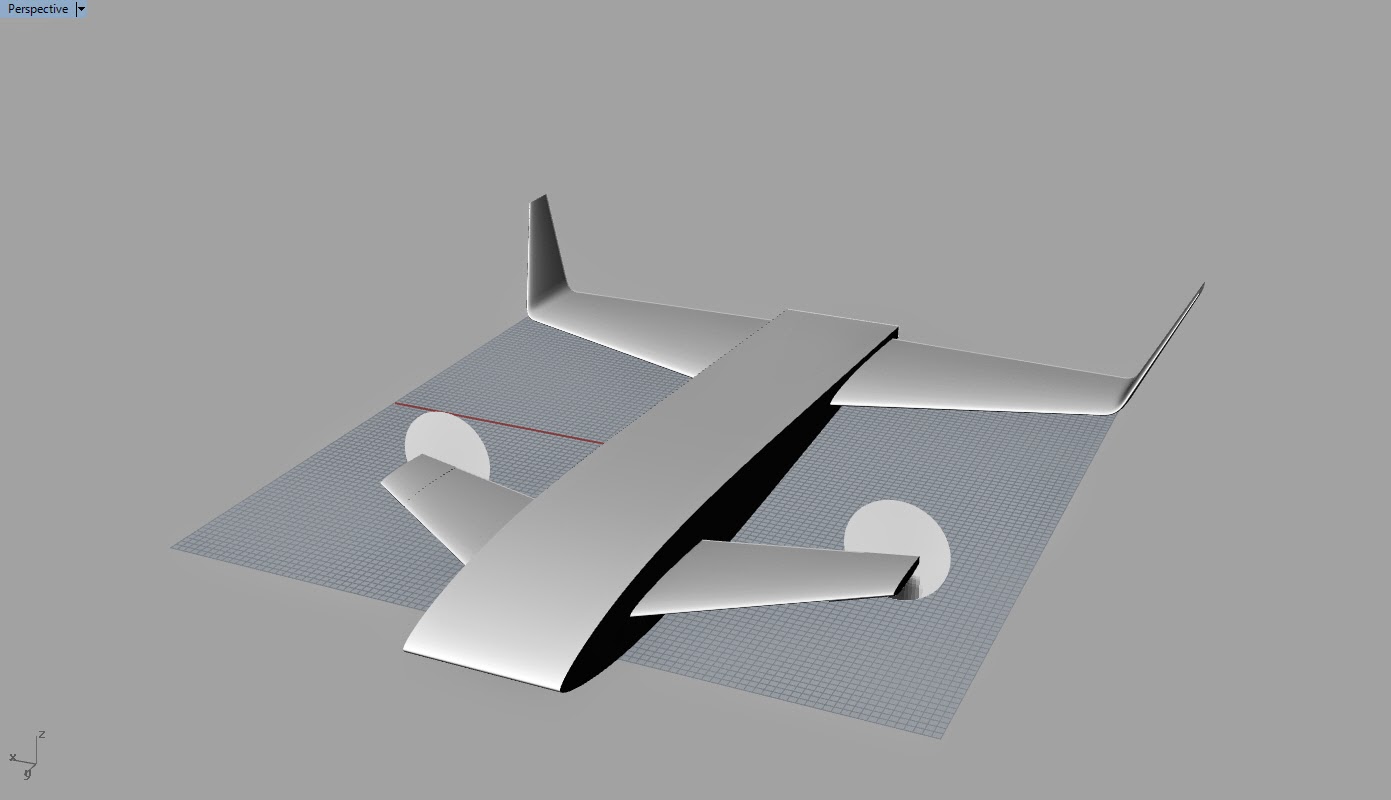 No, but seriously... what is it

Airway is the combination of both an aircraft and a runway; made from foamboard it (hopefully) will serve as a flying landing strip for capable lightweight aircraft.


I started by building the fuselage/landing strip - I quickly learned that joining the foamboard sheets together to make larger panels was going to more difficult than I had thought. 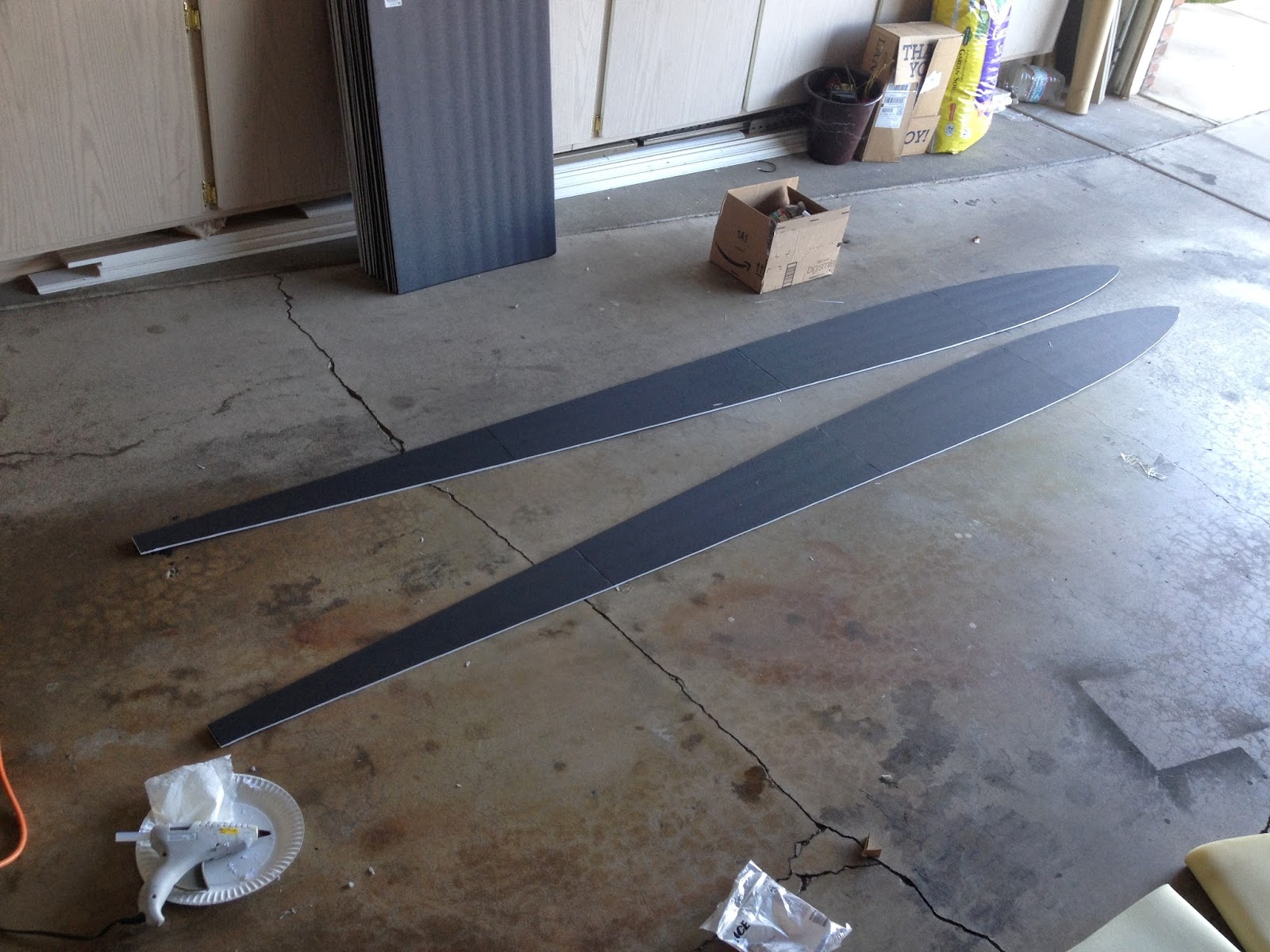 Here we have two fuselage sides ready to be joined with cross panels.

I started out using hot glue to bond everything together but quickly learned that was a bad mistake, more on that later on. 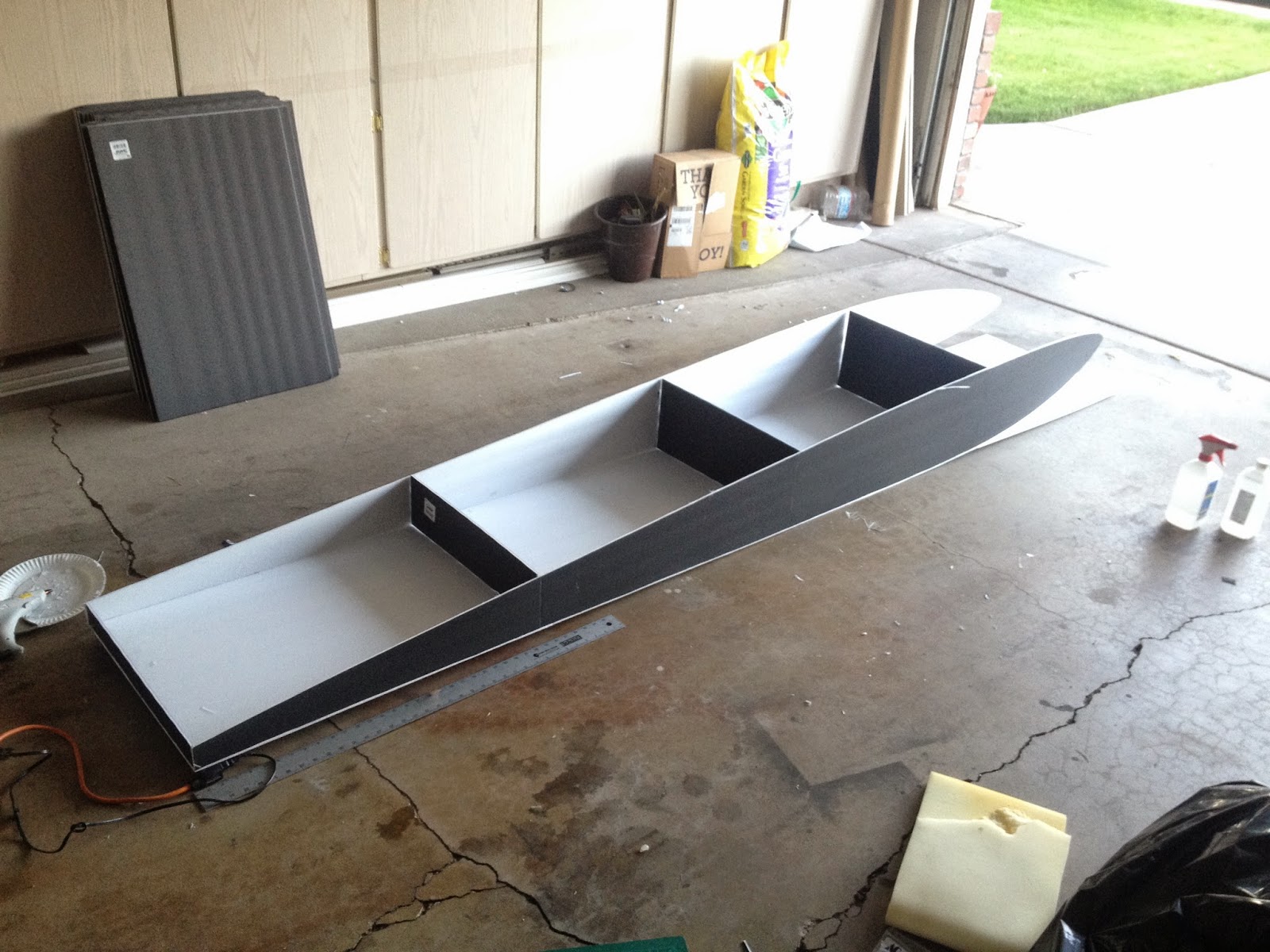 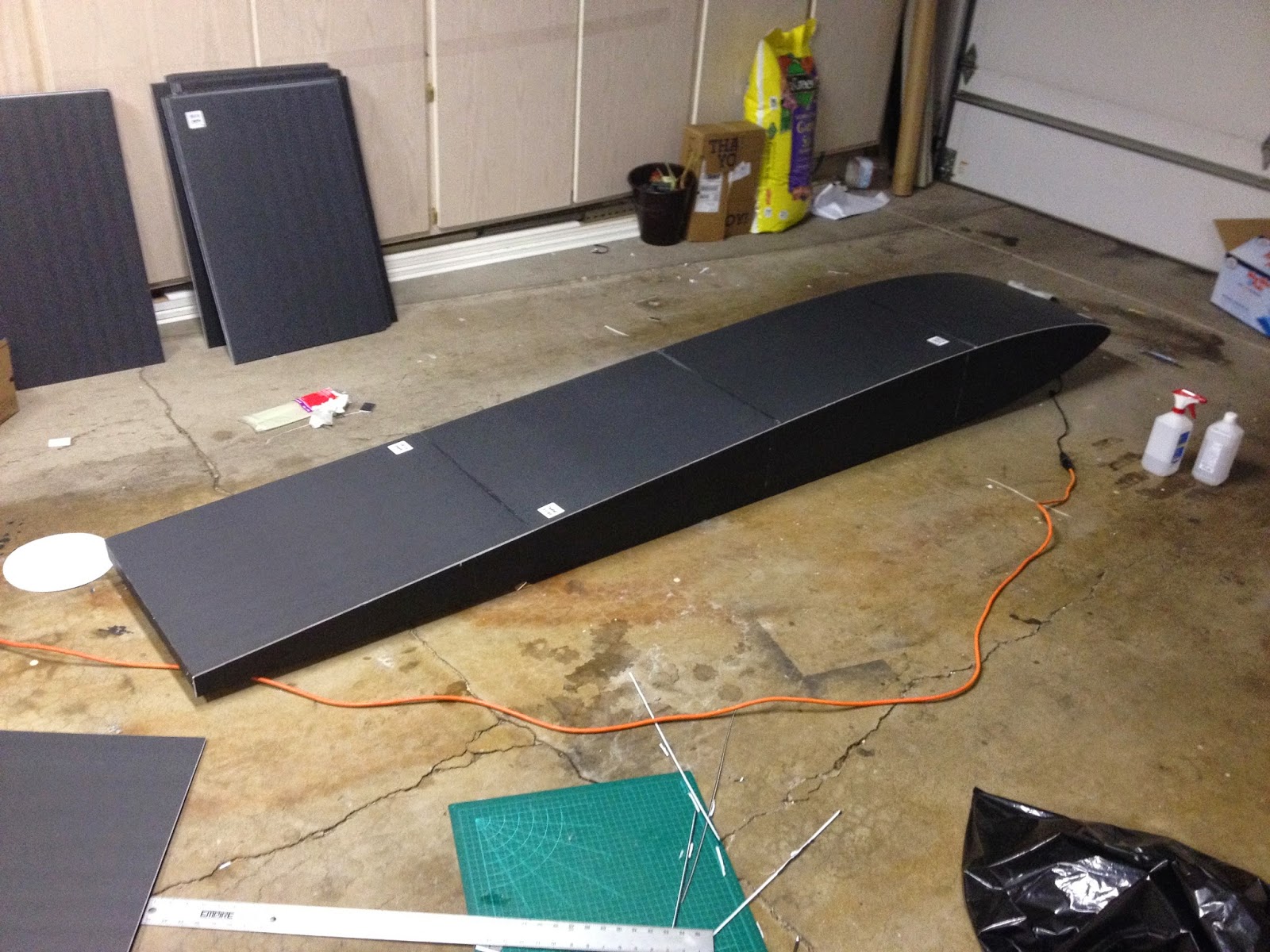 The same part with bulkheads bonded in, and flipper over to see the top side of the runway. 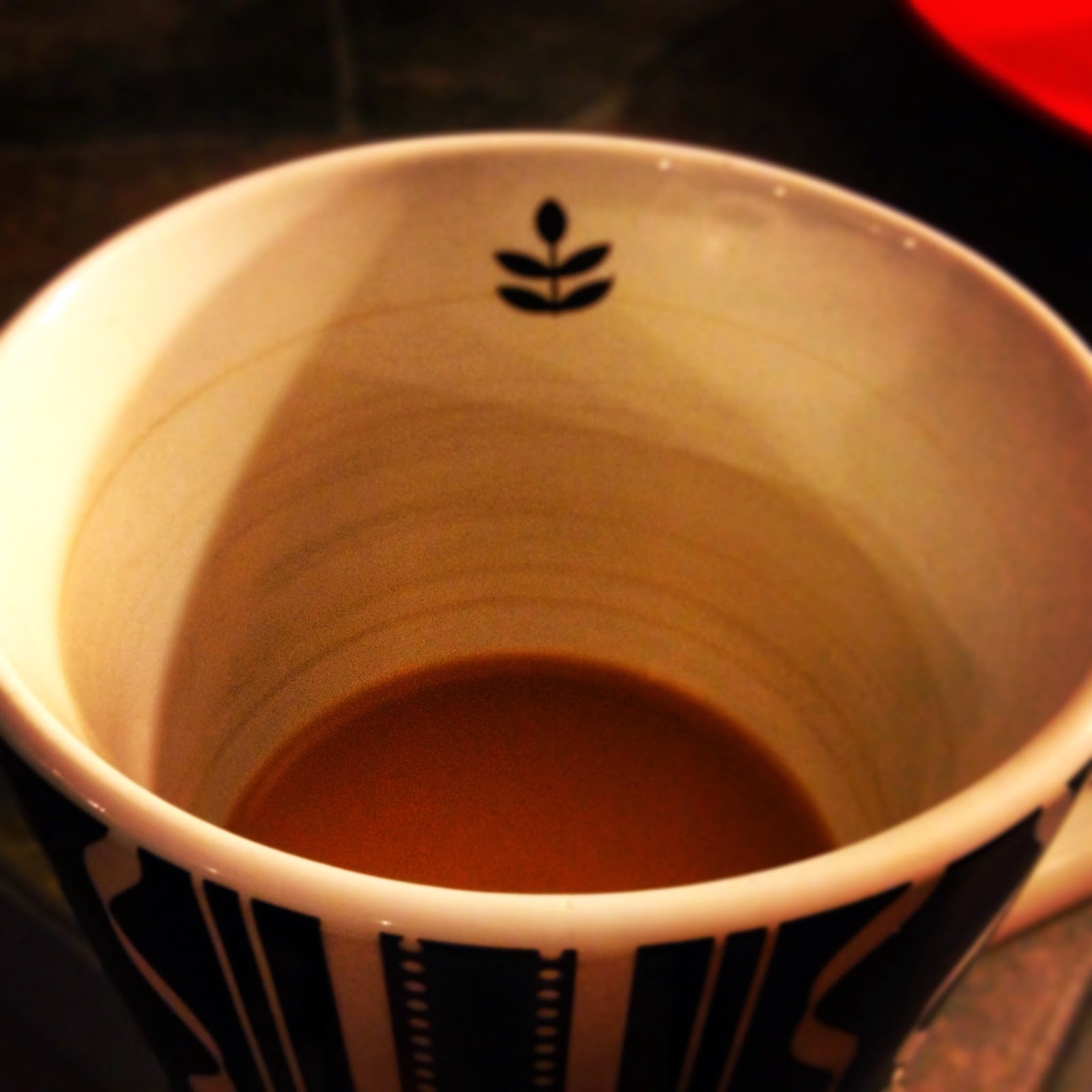 various levels of progress during the day.

Next, I started work on the wing panels. Each wing skin consists of 2.25 sheet of foam; de-papered with isopropyl alcohol on one side. 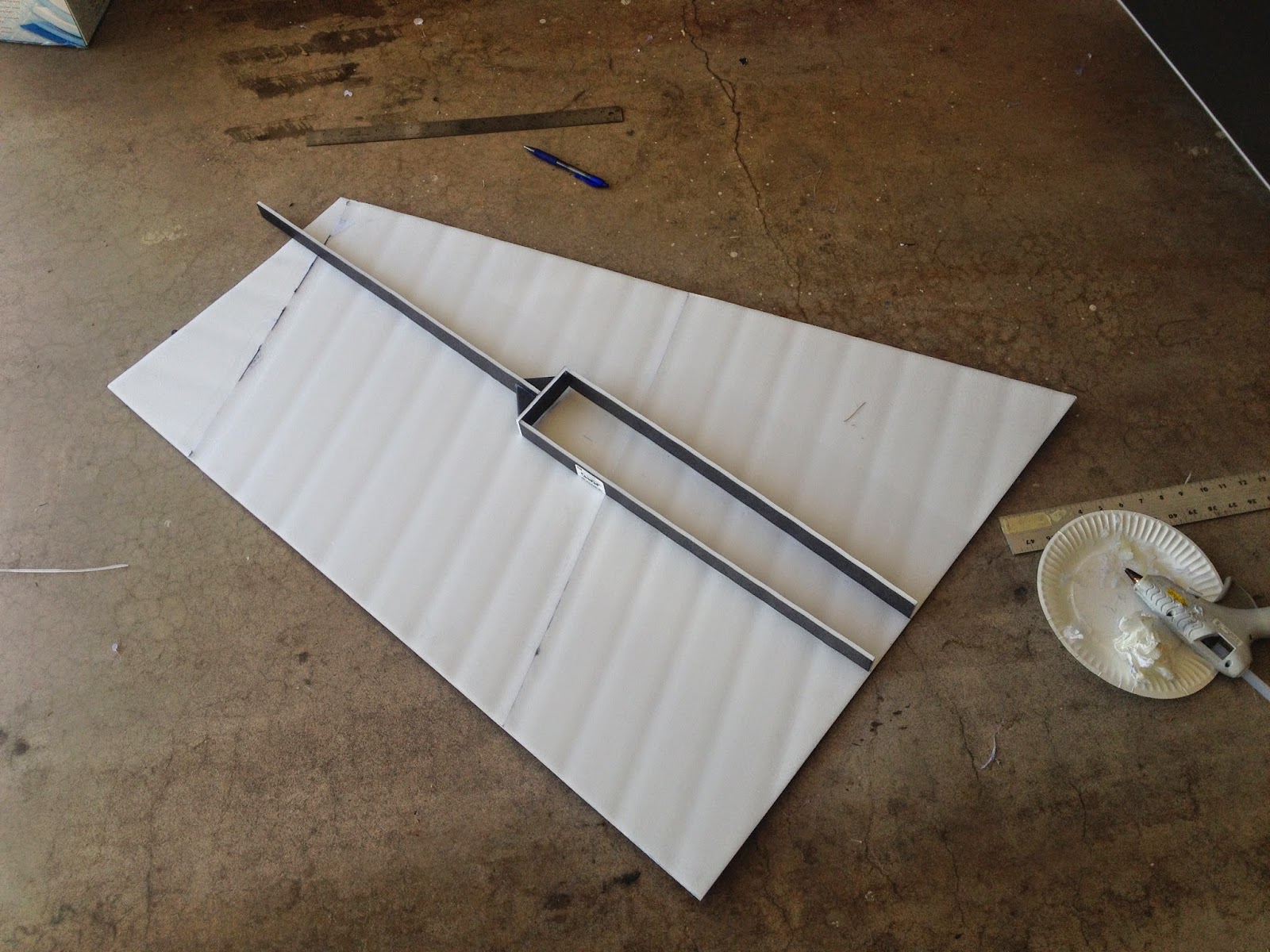 the inside of a wing panel. Also note the gusseted wing spar structure. 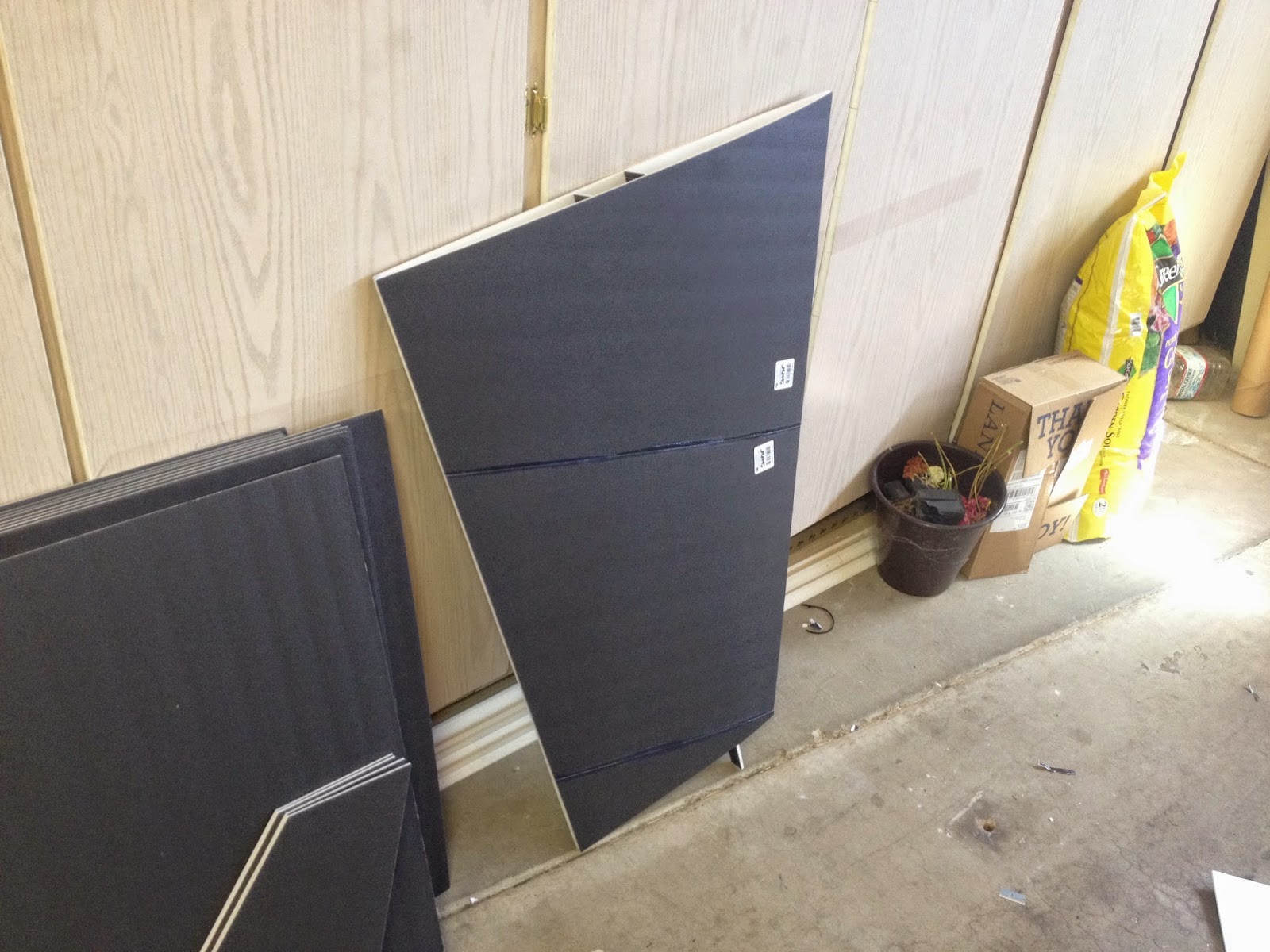 After the wing panels came the wing tube. I was determined to use foamboard for as much as I possibly could. Both for weight reasons, and for cost. 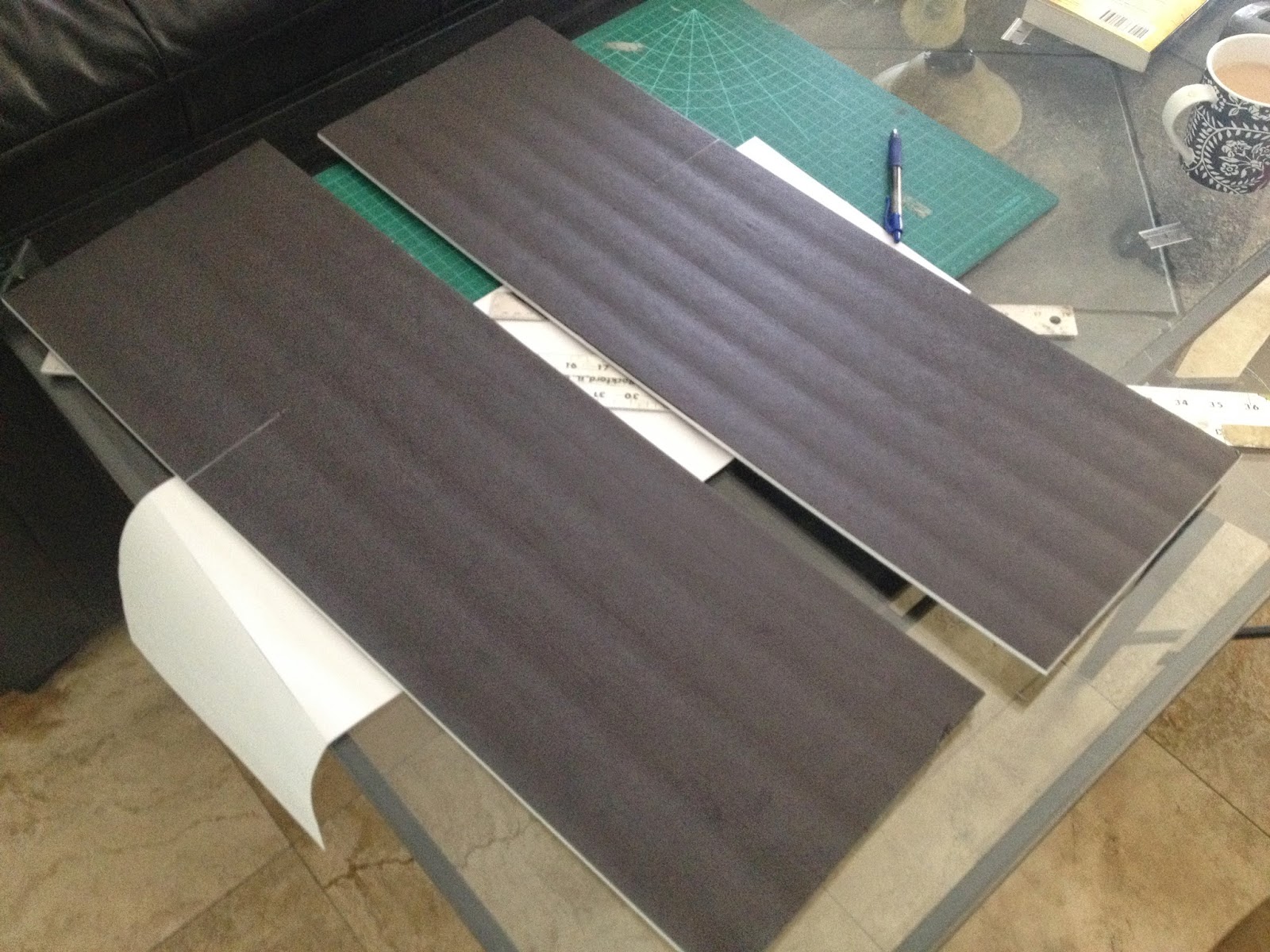 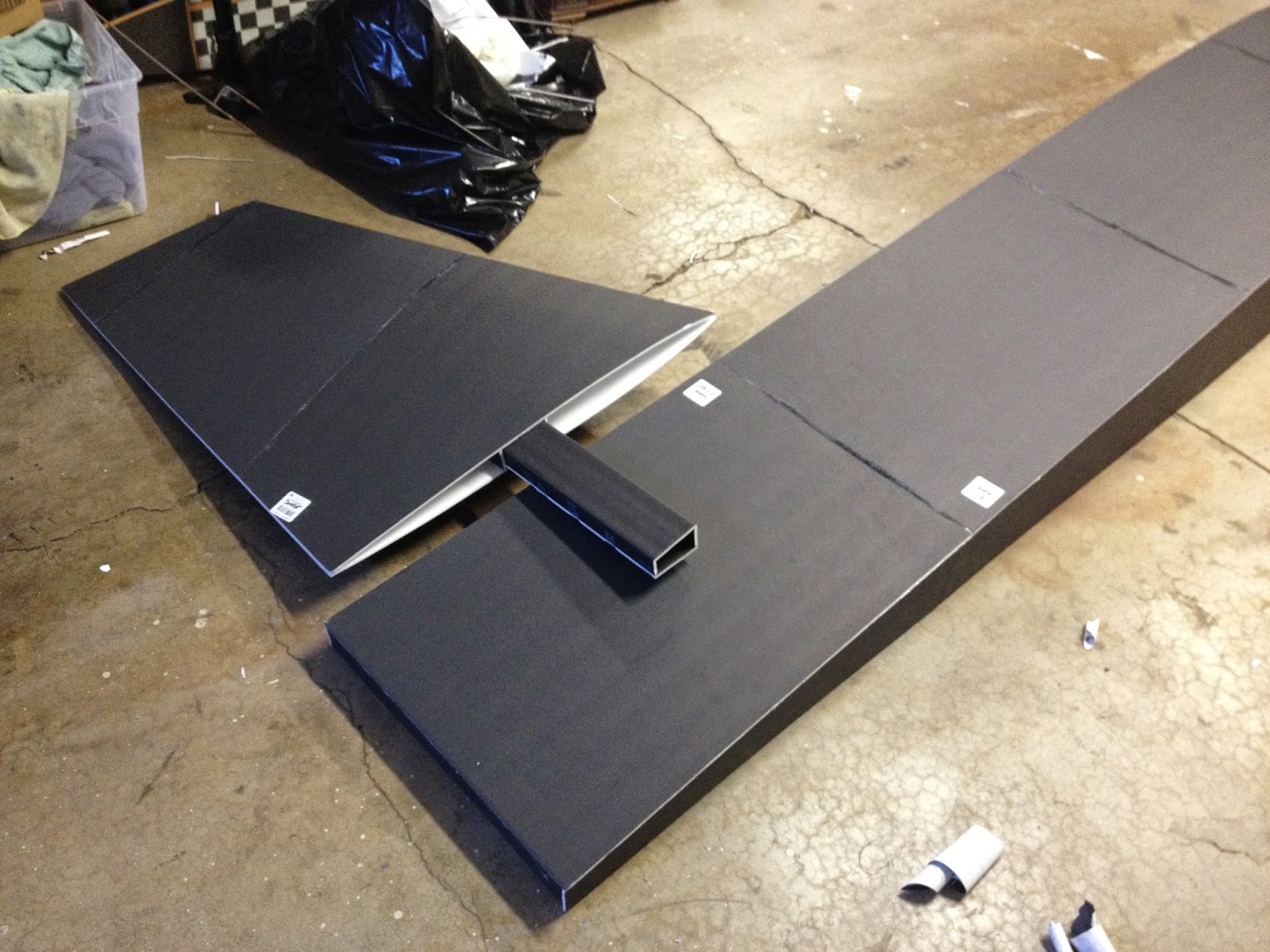 A test fit of the wing tube was performed to make sure everything fit before being glued together. 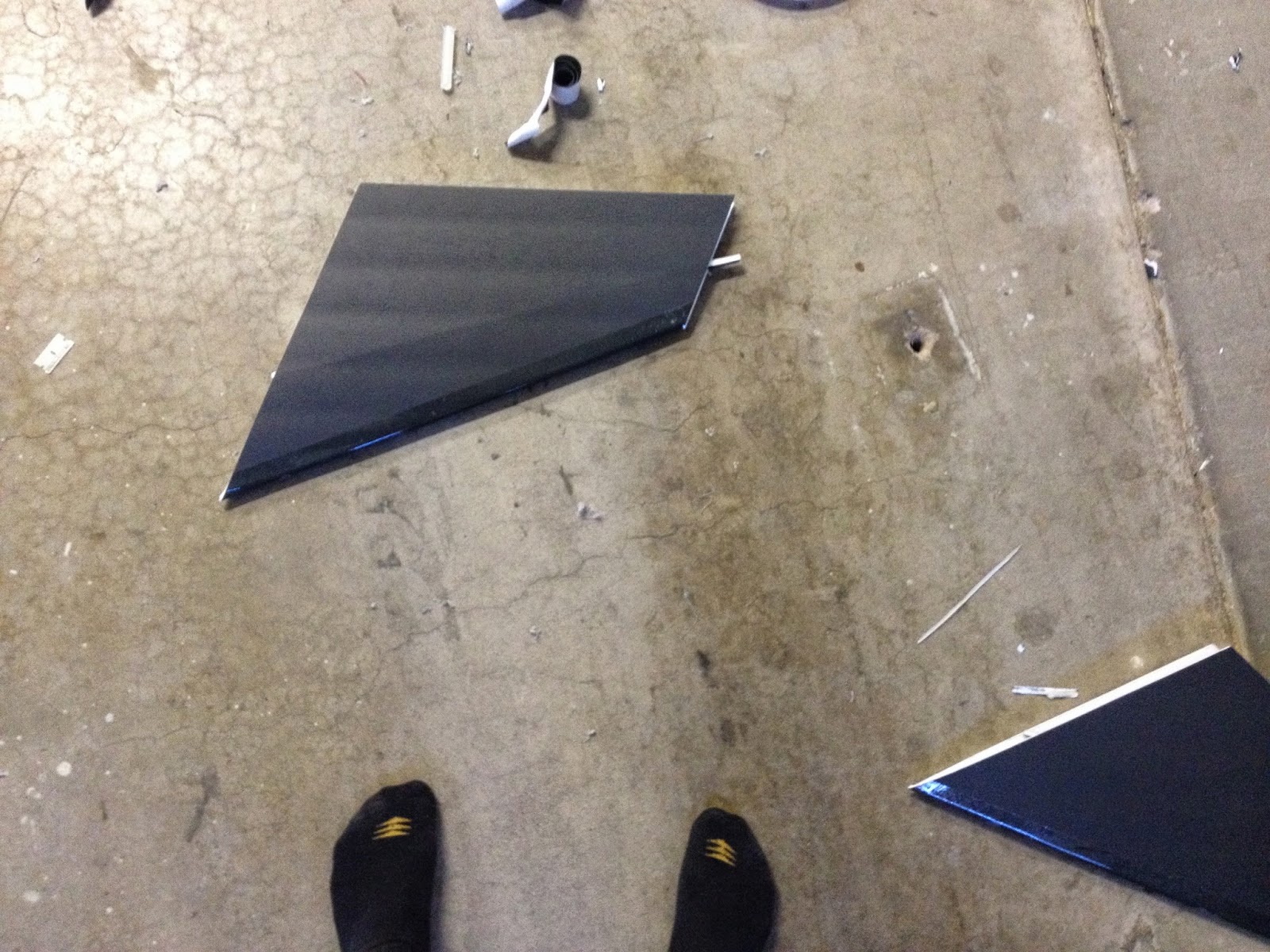 While the glue dried on the wingtubes, I decided to take advantage of the time and build these cute little vertical stabilizers. They're made with a single sheet of foam (inner paper face removed) wrapped around a foamboard spar with tape on the leading edge to precent cracking and glue holding the rest.

Next, I had to come up with a way to capture the wing tube within the fuselage that would work more than one time. I made this little tabbed structure which when bonded into the fuse contacts the left and right walls, as well as the upper and lower skins - providing a large amount of stress distribution, as well as rigidity - not that this plane needs either of those two things. 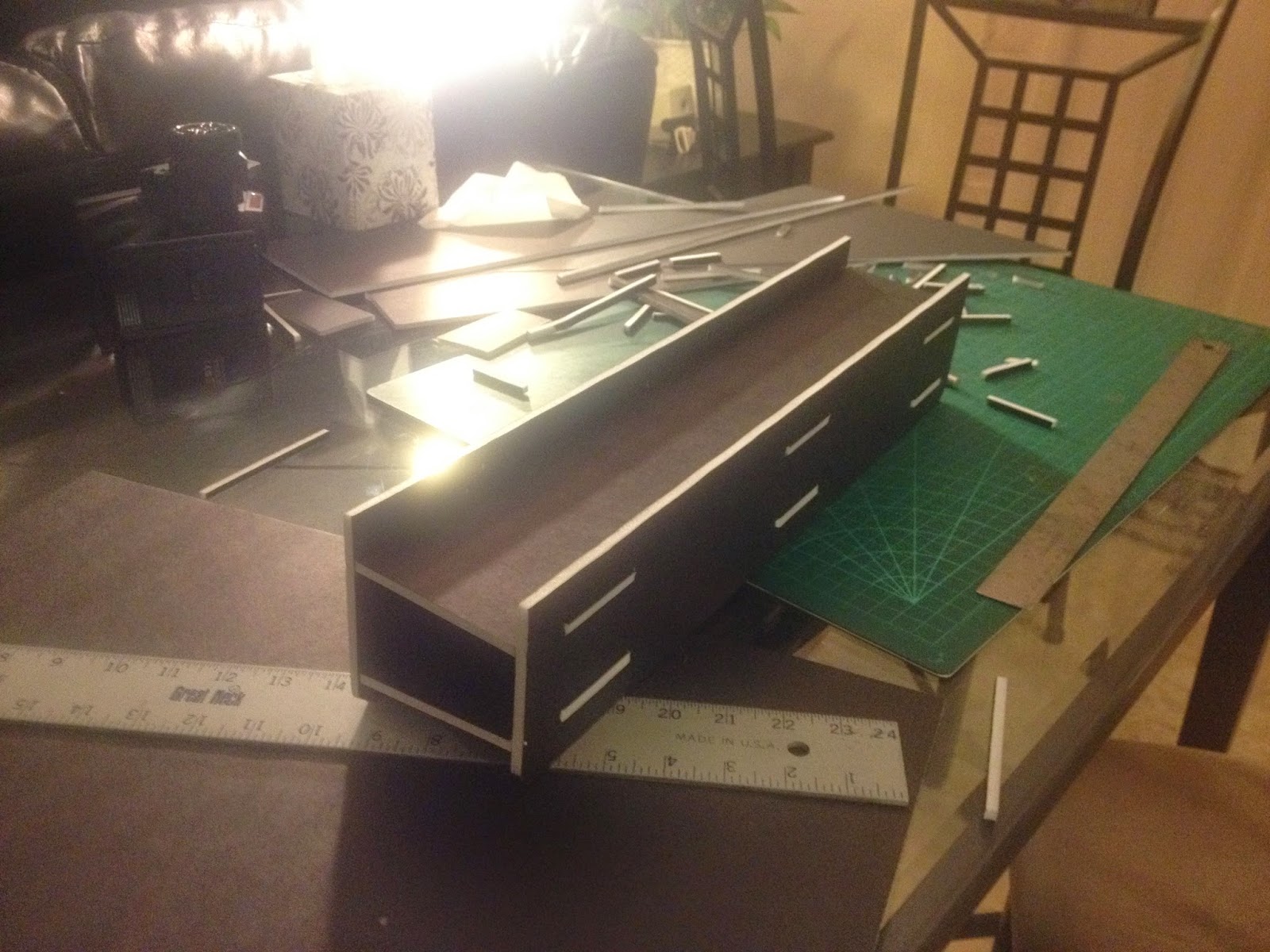 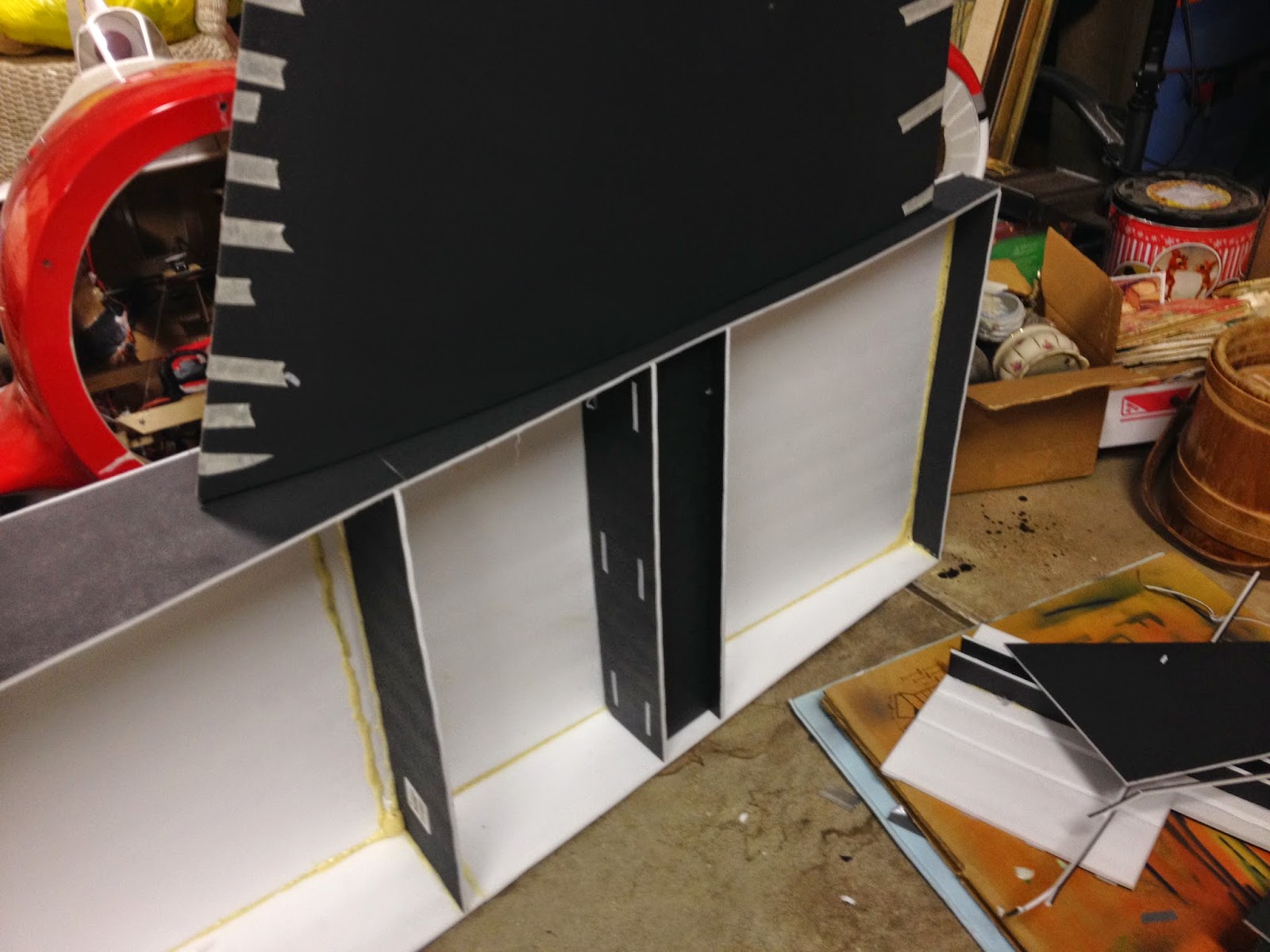 aand the box test fit into the fuse

Just prior to that last picture was the moment I was talking about earlier - the moment where I regretted building it with hot glue. Up until this current build everything had been going well, and the aircraft I had built prior had remained durable and structurally sound. The only difference was the average day then was 15-25 degrees cooler than it currently is. I had put the airplane out in the driveway to take a picture with the wings inserted and ran back inside for a minute to grab something and came back outside only to find a pile of parts sitting in the driveway where my aircraft had sat only minutes ago. I think that was maybe the third or fourth time I almost threw the project away, but that wouldn't solve anything; So I checked the internet, and also with a few friends to see if they would confirm my thoughts on a new, more temperature tolerant adhesive. The majority answer was Gorilla glue.

Armed with a spray bottle, some paper towels, and a new bottle of Gorilla glue I set in to see if I could fix the mess of an airplane that I had before me. 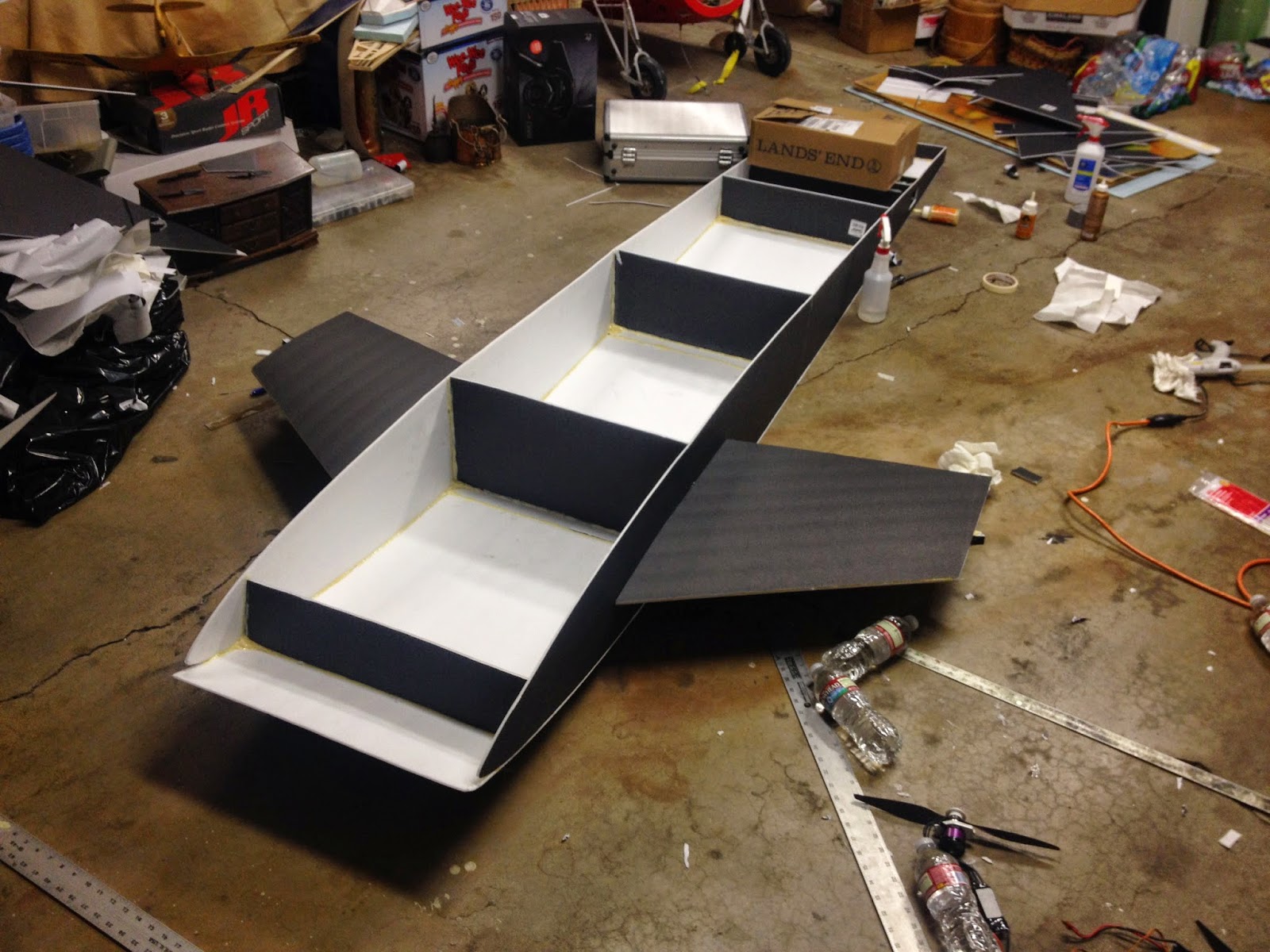 here we see the plane post-slathering of the joints in Gorilla glue.
I learned that Gorilla glue is magic. Terribly sticky magic.

Now seems like a good time to throw up a sort-of-assembled shot: 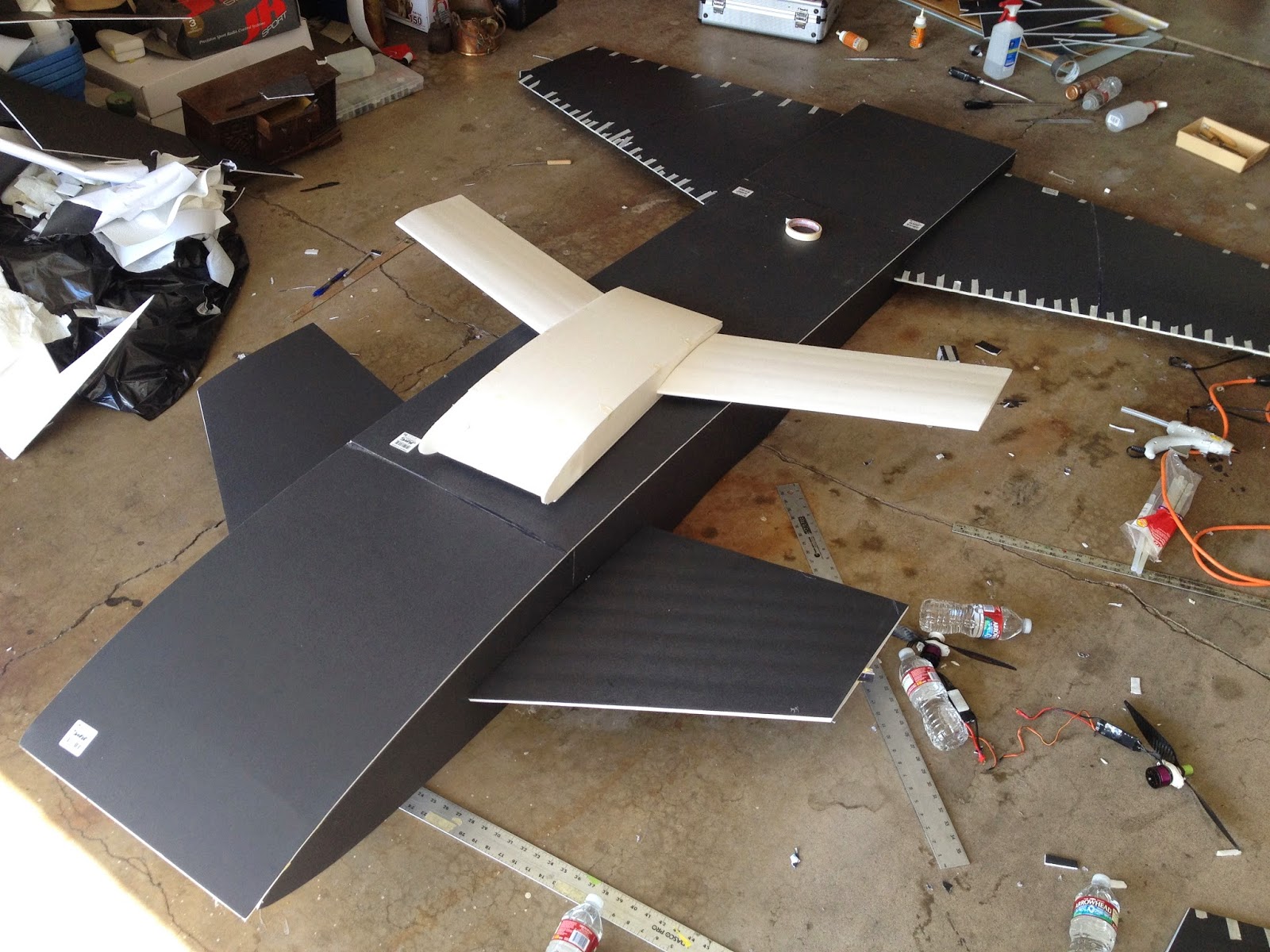 The aircraft on top is 72" in span, for size reference.

My attention then shifted to the Canards/motor pods. I had to make a couple motor mounts, and cut/hinge/rig the canard surfaces, as well as attach the motor pods to the canards. 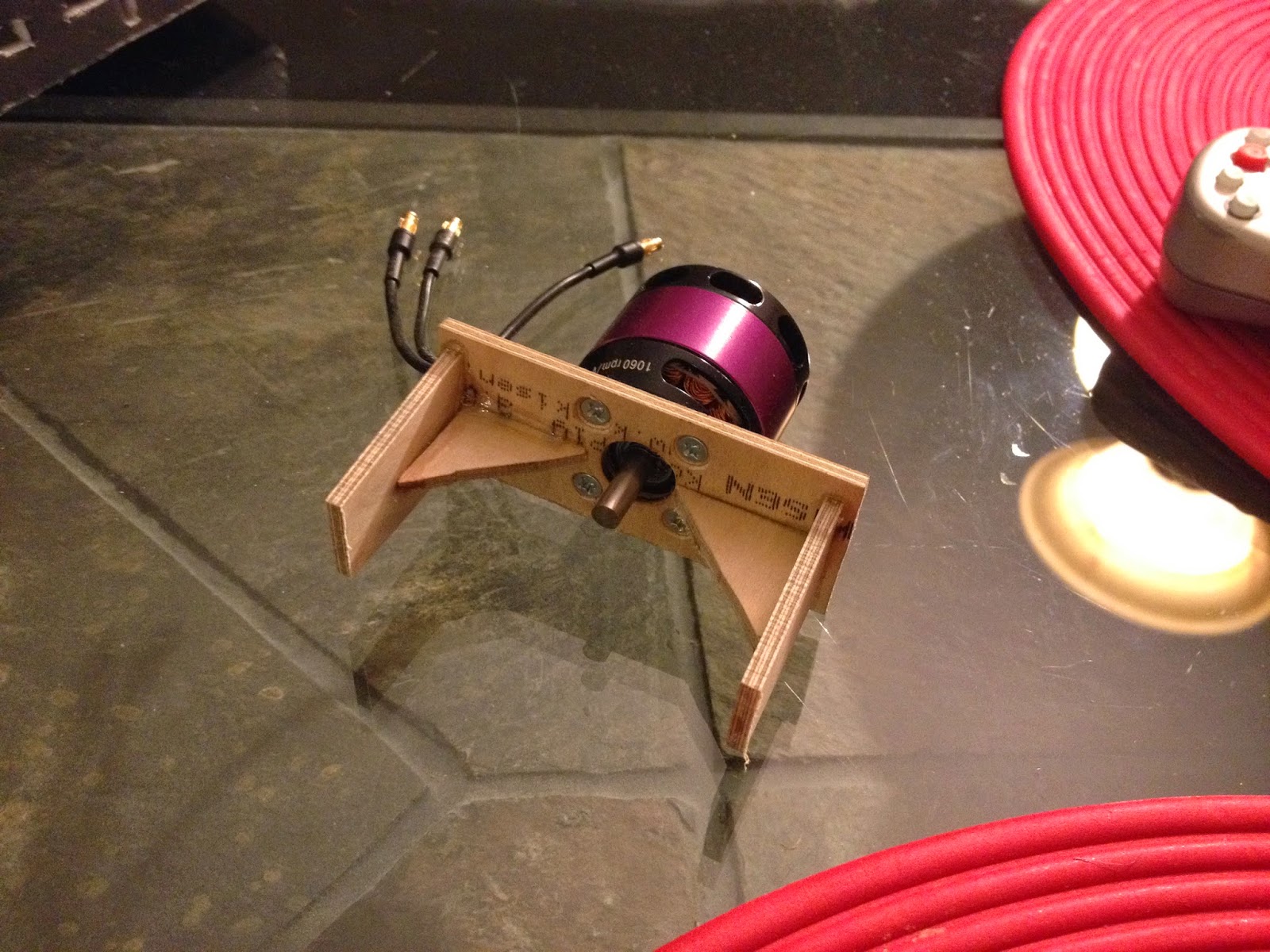 Here's one of the motors attached to a motor mount. 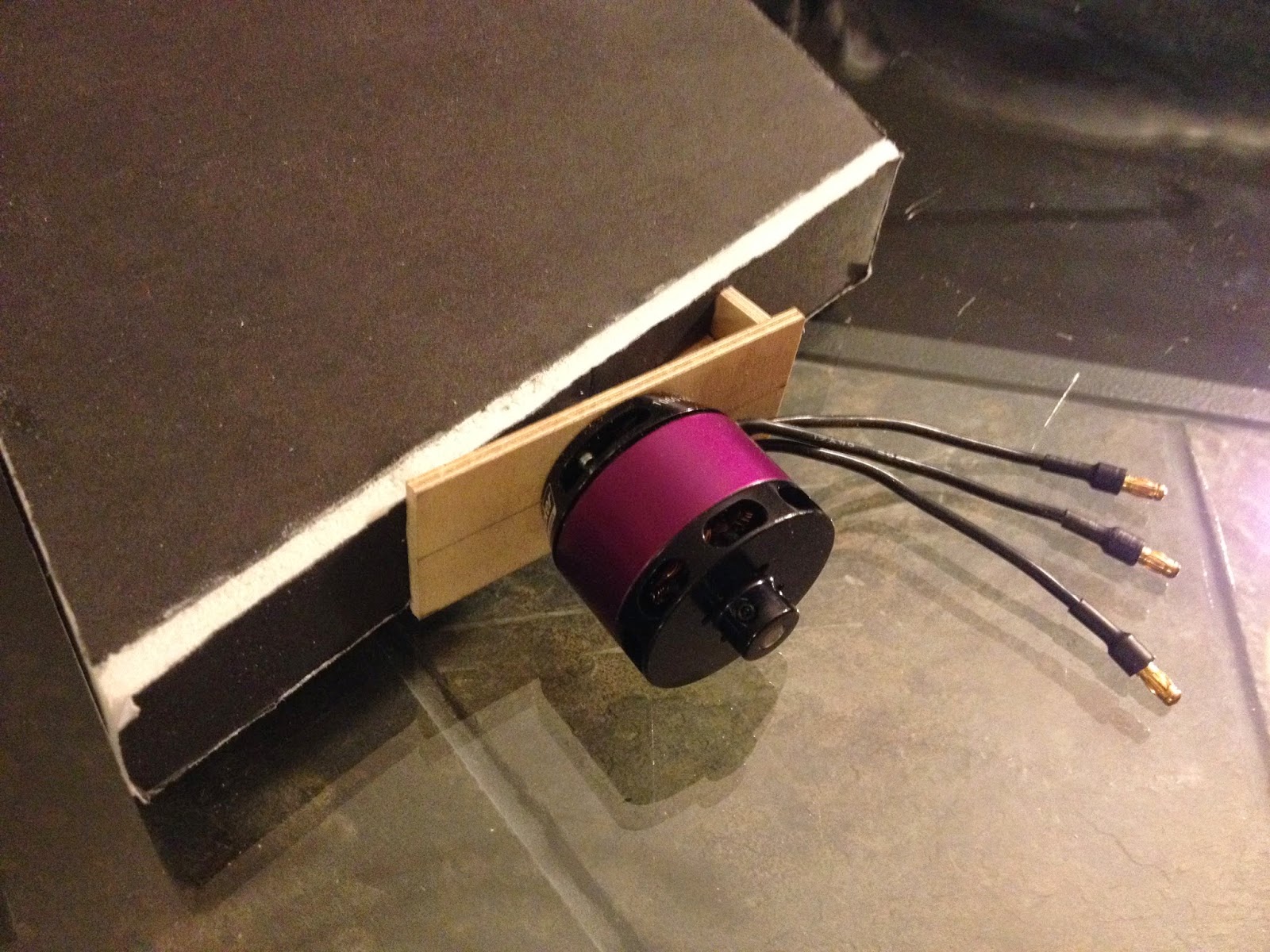 And said motor mount assembly mounted to a motor pod.

The motor pod assembly is then fitted to the tip of the canard as seen here: 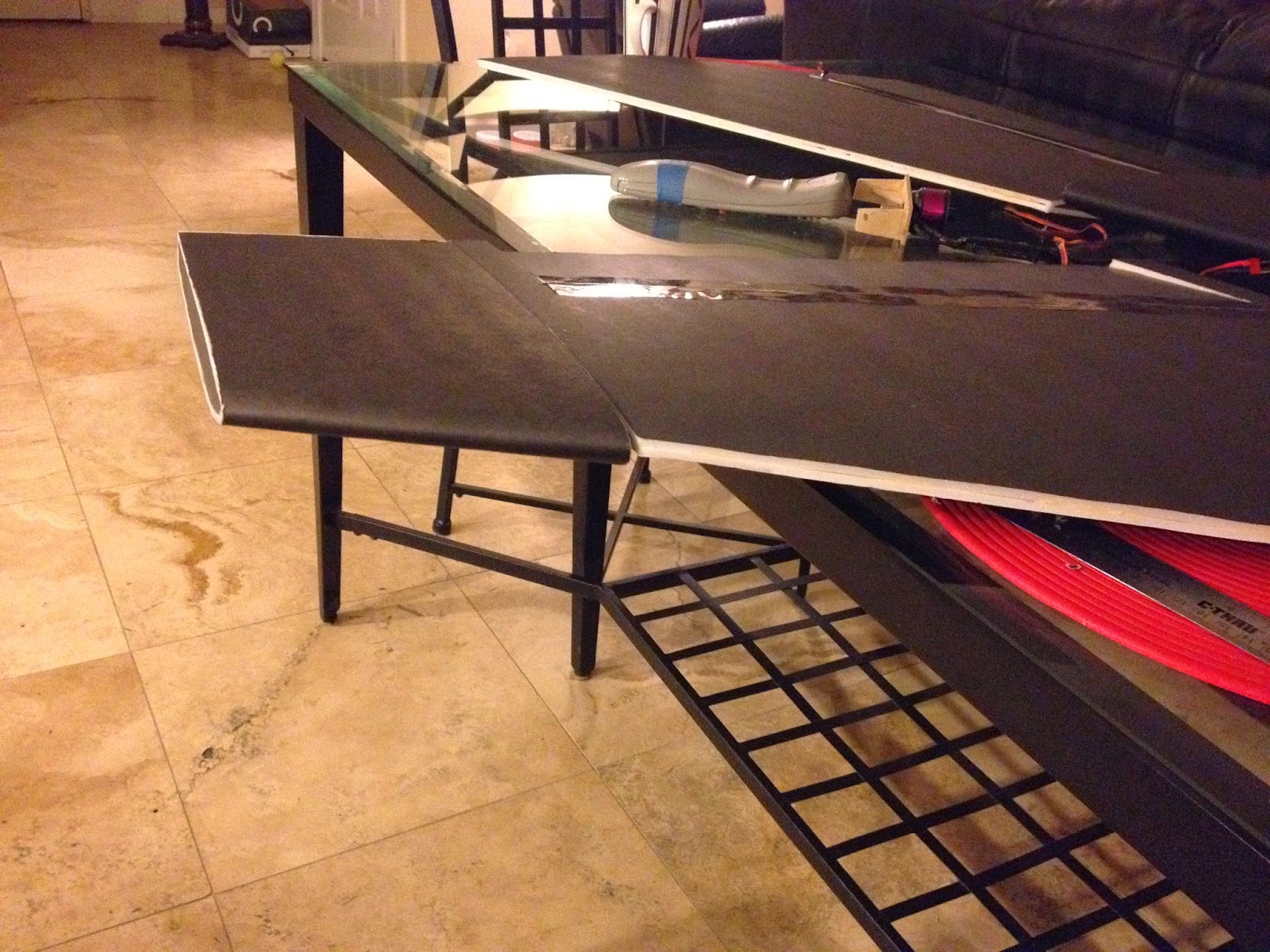 The canard spar is a piece of 1/4" balsa wood that's sandwiched between  two pieces of foamboard. 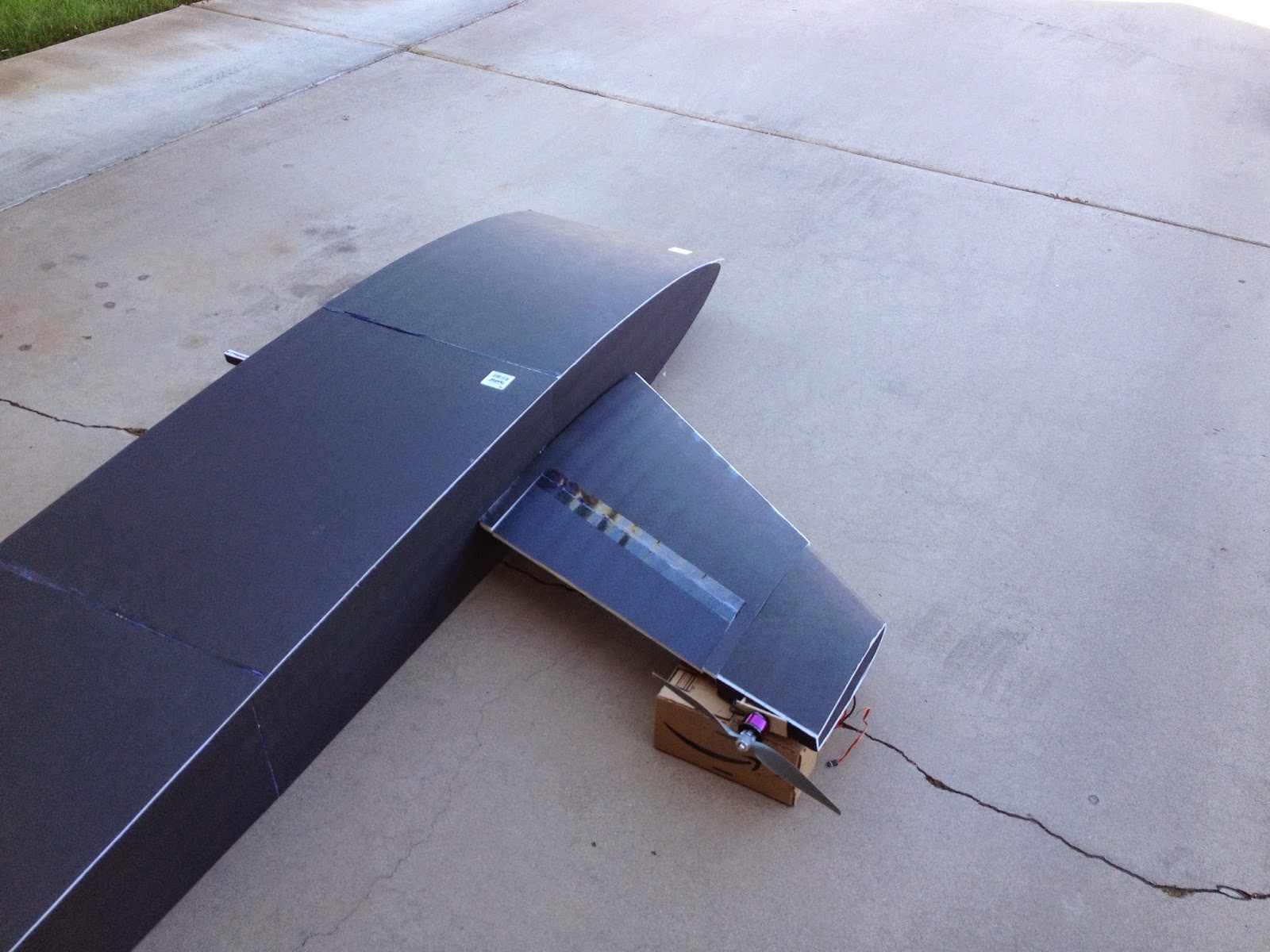 here I'm test fitting the canards to see if it actually does fit to the airplane correctly. 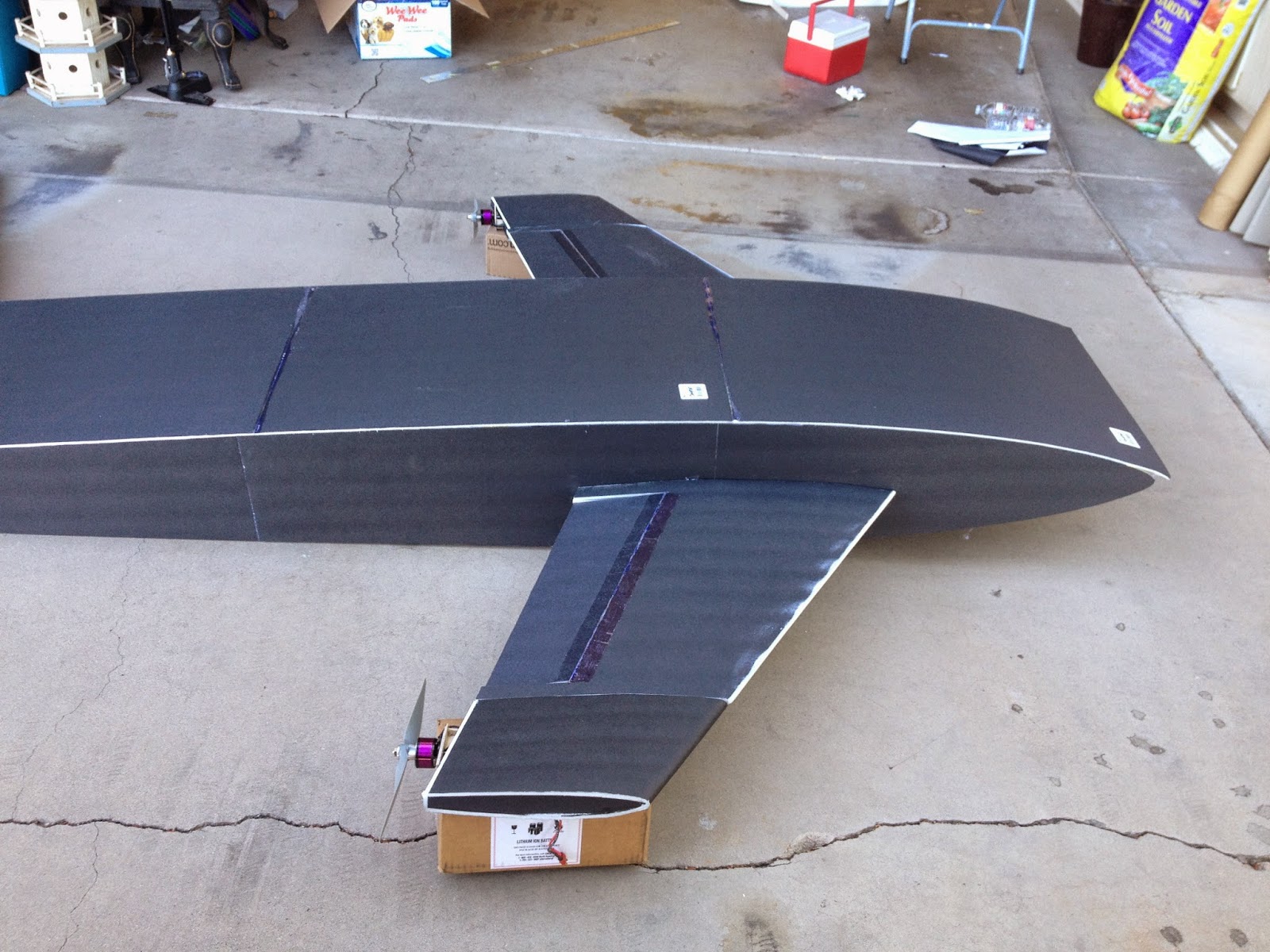 aand the other side fits as well. 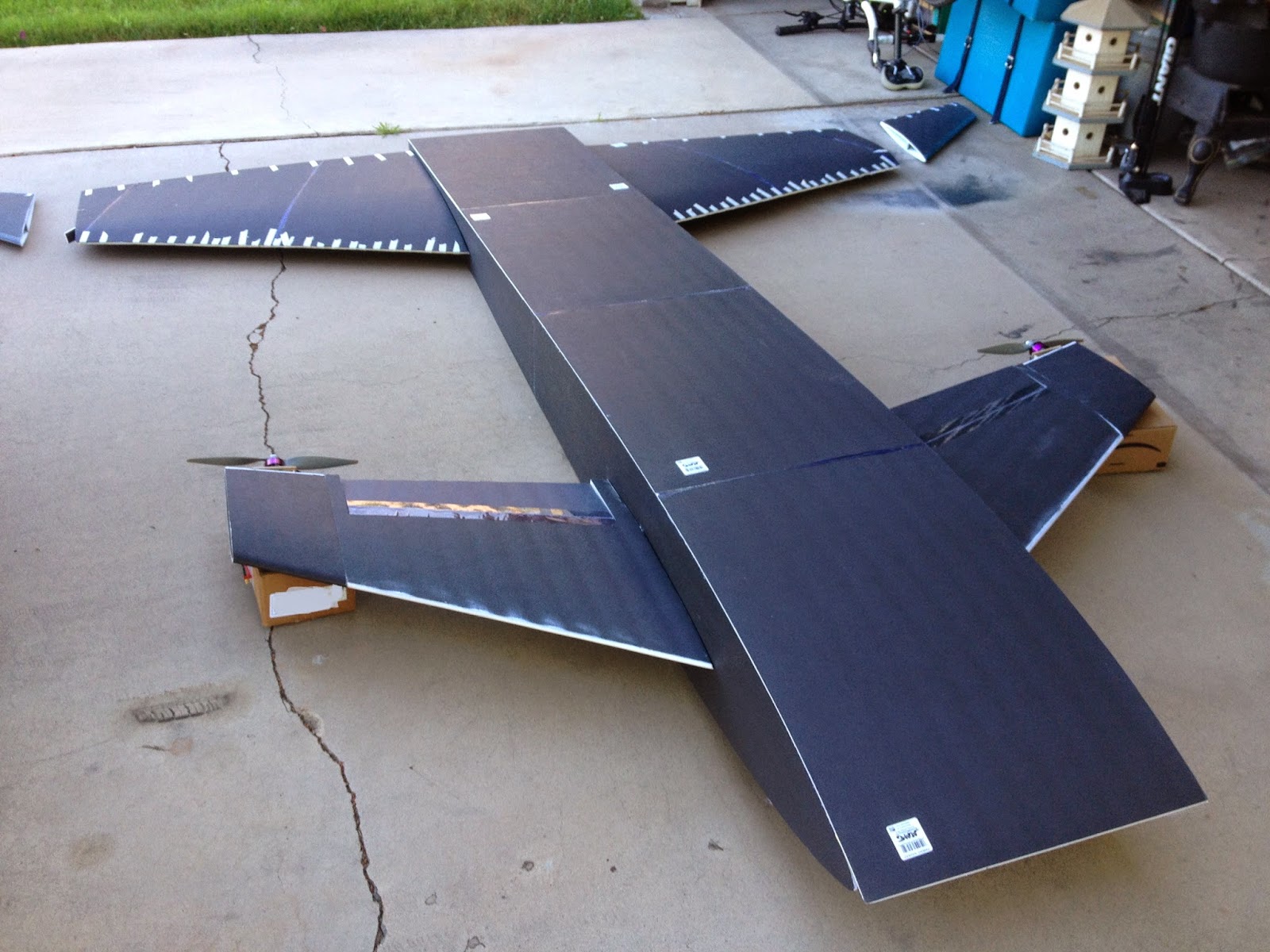 Time for another driveway flight!

I decided the best way to make everything play together nicely was to mount the canards permanently to the fuse and add in a fuselage joint.

meet this outrageous press fit nub thing, for lack of the actual term. 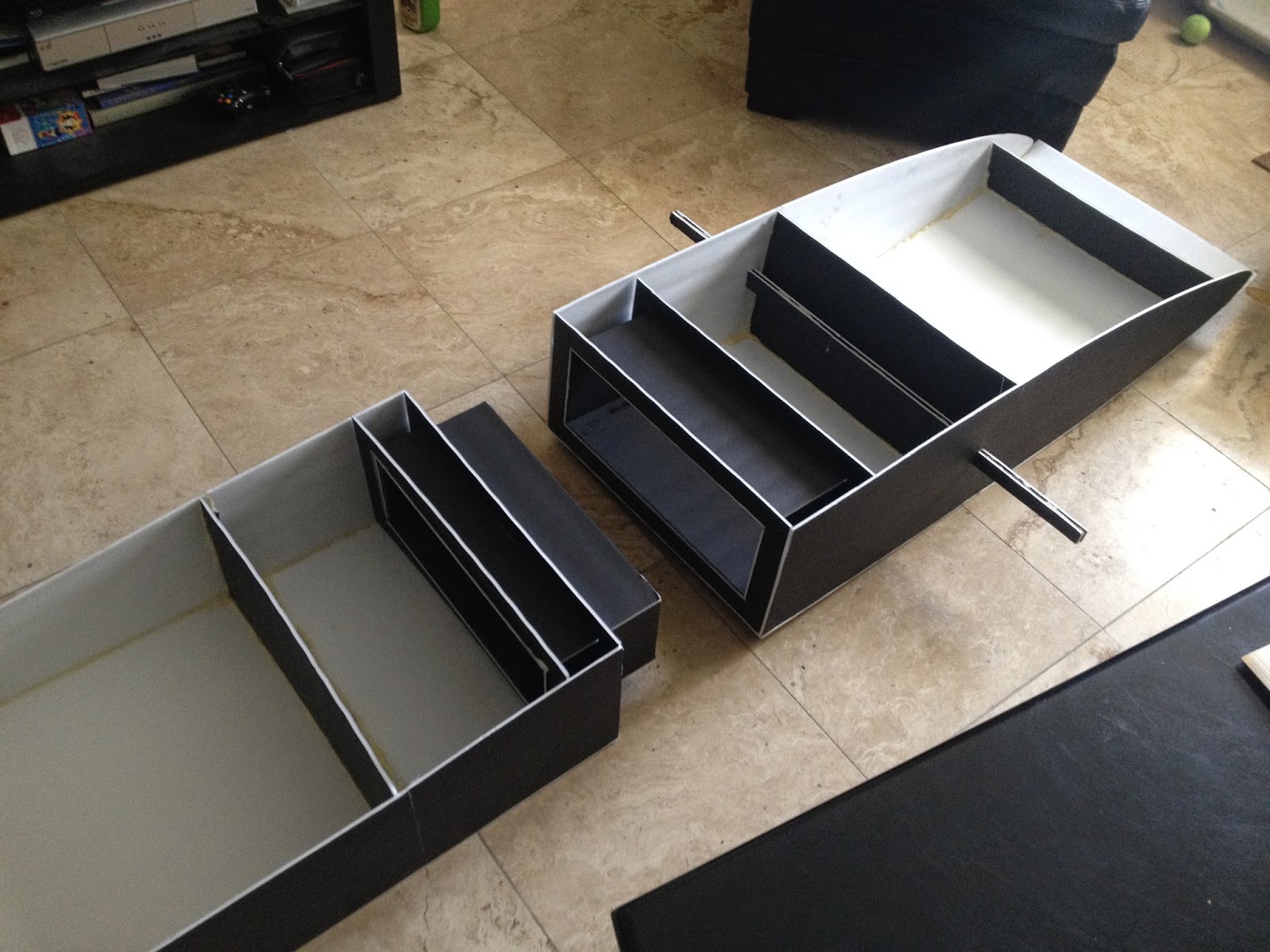 what's the overlap tolerance for a foam press fit? 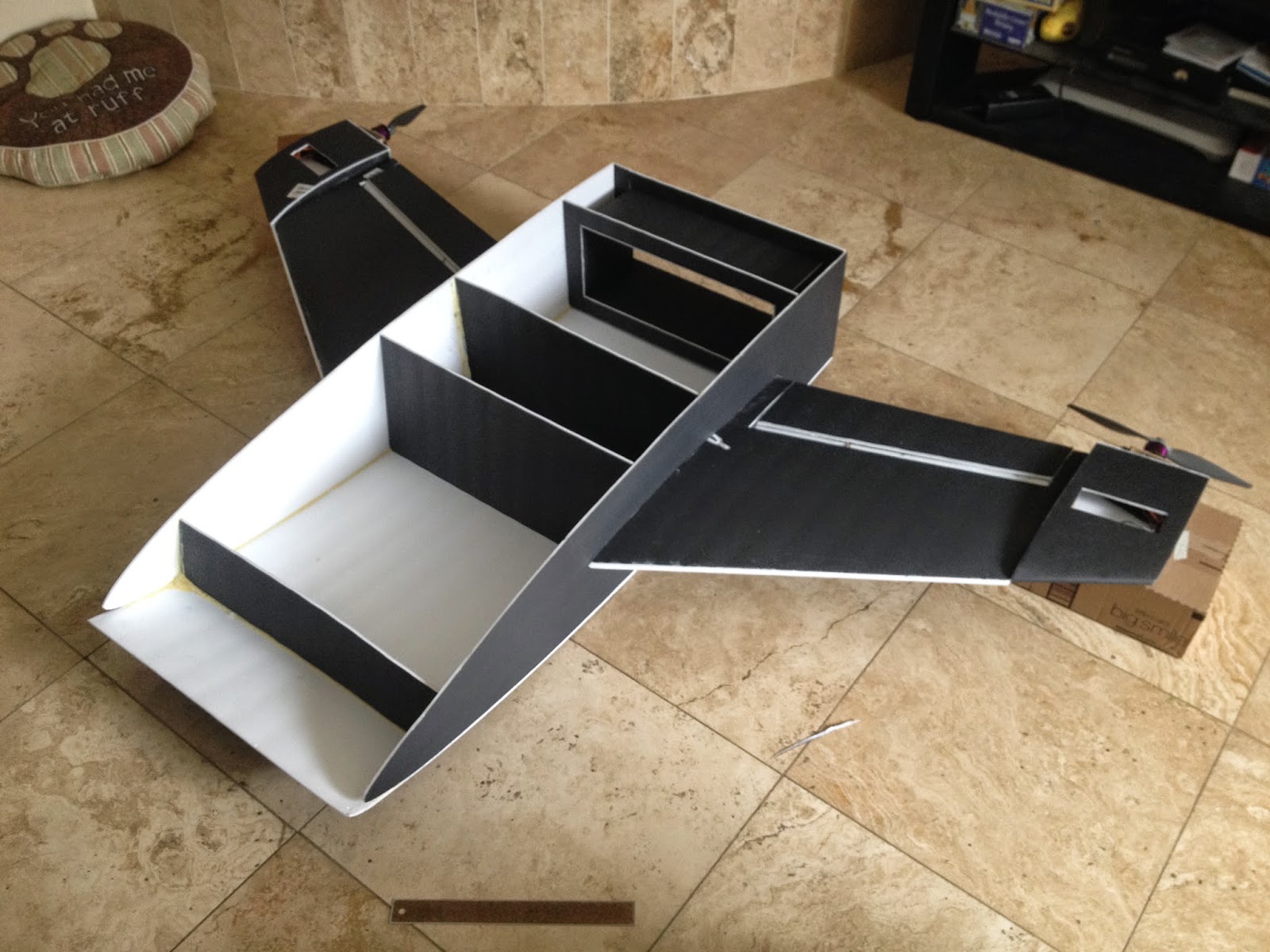 Here we are gluing the aforementioned canards to the forward fuse - I also added another bulkhead to support the forward canard spar.

I then sheeted the bottom side of the forward fuselage: 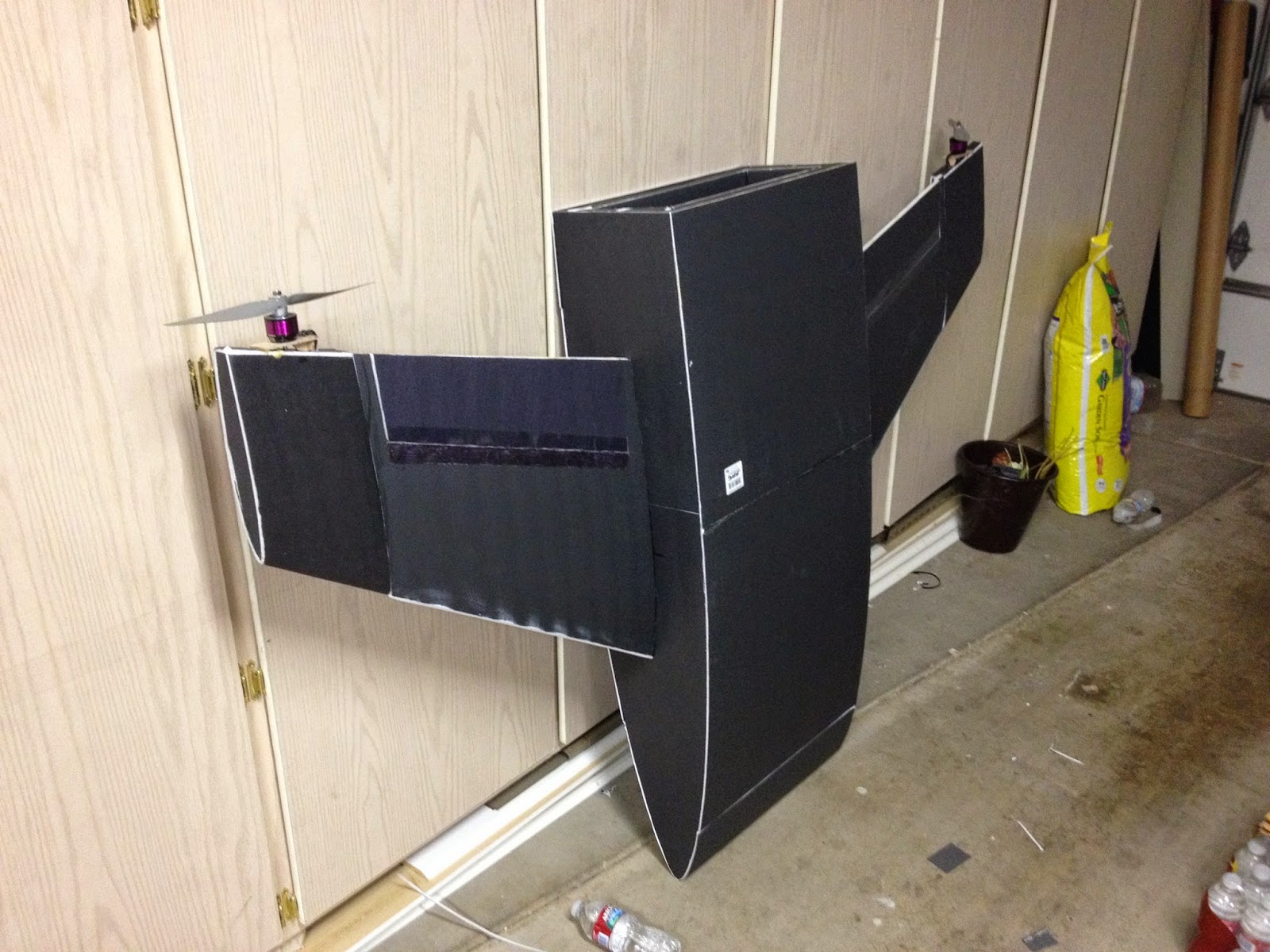 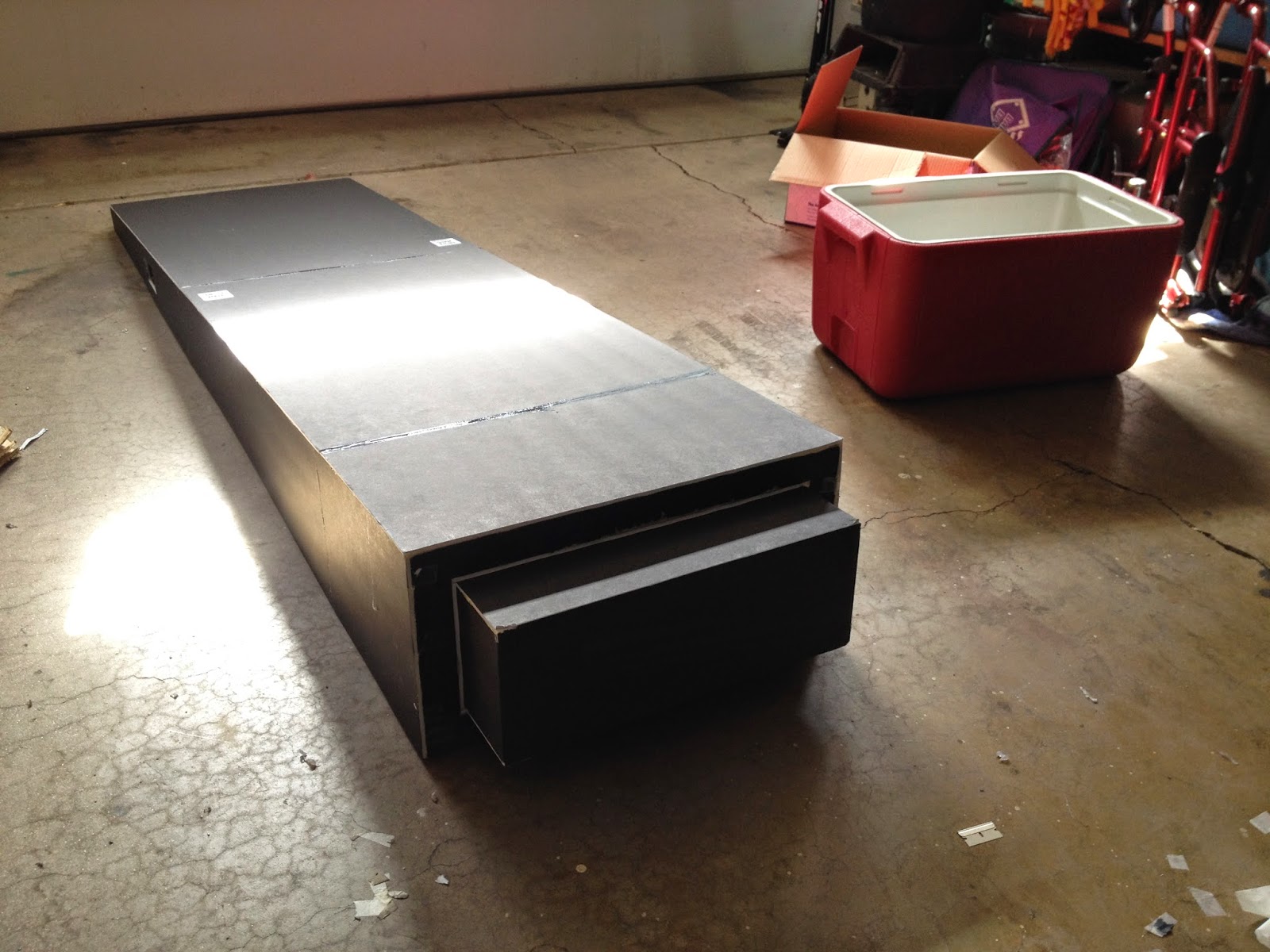 The rear fuse is coming along nicely too, here it is with the nub bonded in.

So I actually ran out of foam CA glue and haven't been able to find any more within decent driving distance. I've ordered some glue online and it should be here in the next few days, unfortunately I'm going out of town for a week or so, maybe two on a business trip and I won't be able to work on this monstrosity for a bit. I do have plenty of other things to write about, and hopefully I'll be able to drop a few blog posts here and there over the next few weeks, but until then -